Is my internet connection good enough for online sim-racing? 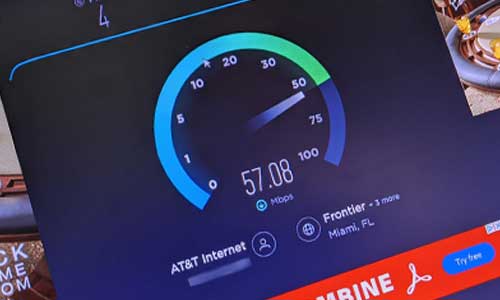 Posted by F. Rico on 5/28/2019 to Tech
We often get asked how good does the internet connection have to be to sim-race online on titles such as iRacing, Assetto Corsa, rFactor and the like. The answer may surprise you. One would think the amount of data being sent is huge and it needs to be transmitted incredibly fast. However, the truth is that while the data needs to arrive very fast, it is actually not a large volume of data at all.

The reason there is not very much data is that each sim driver is running a very powerful computer and the calculations performed to determine how the car interacts with its surroundings is being calculated by each drivers' computer for the car they are driving. So if you are driving in a race with 40 cars in it then there are 40 computers modeling the physics, one per car. Each computer then only has to share information about the position, speed, and direction of their respective cars. This information is sent to the server. The server then combines the information about all the cars in the race and sends the information back out to all the simulators so that they each can render the car in its proper position. In cases where there are computer driven cars (AI) in the race, the task of driving those cars is assigned to one or more of the simulator computers that can handle the extra load, but the interchange of data is the same.

The resulting data interchange is merely a listing of the position, speed, and direction of each car on the track and perhaps some track objects like cones and such. This amount of data is miniscule compared to the pictures and videos we consume online on a daily basis. So the main objective with regards to network connectivity for the purposes of online sim-racing is simply low latency. The data simply needs to be transferred without delays.

Wireless connection have inherit delays. Wireless connections are not a direct connection, they connection is time shared with other wireless devices. A wireless networking channel can only communicate with one device at a time. Therefore, if there are multiple wireless devices present such as cell phones, tablets, music players, home assistants, etc., then each of those devices is sharing time on the wireless connection which introduces delays. Another phenomenon affecting latency is data compression. Wireless connections are getting faster and faster, but in order to achieve these faster throughputs compression is implemented. Typically the transmitting device will compress the data in order to send more data in the same amount of time adding some latency. The receiving device will receive the compressed data and dedicate some time to uncompressing it, adding more latency. When large amounts of data are being sent, such as for a video, then the time lost while compressing it is more than gained by getting more data sent during that time. However, since the amount of data being sent for sim-racing is very small the end result can actually be a greater latency.

Wireless connections also suffer from interference. More internet users are aware that a weaker signal means a slower connection, but few understand exactly why that is. Wireless data transmission suffers from interference. To prevent interference from corrupting the data the protocol implements an error-checking method. This enables the receiving device to verify the data arrived the same as it was sent. While the method employed in error-checking is beyond the scope of this article, the method is very effective at weeding out data that has interference. When interference is detected, the receiving device requests that the data be sent again. The greater the distance between the transmitter and receiver, the more likely the possibility of interference thus a greater number of times the data must be re-sent. This adds greater amounts of latency.

For this reason, it is always recommended that a "wired" connection be used. The speed of the internet connection is not as critical as the latency. We recommend against wireless connections except when there is absolutely no choice. Latency can be measured with a Ping. A ping is essentially a request for acknowledgment of a server. The server will then respond to the request and the amount of time it takes for the request to come back is the latency. Now, the latency will be different for each server and can vary throughout different times of the day. However, pinging a server some distance away will give you a good indicator of how much latency there is in your connection. A ping of less than 100ms is acceptable for sim-racing.

While connection speed is not essential, it should be a minimum of 128kbps. This would allow the data packets to flow with enough speed to keep all the drivers in the race updated with the position, speed, and direction of each car. However, downloading updates to your software will greatly benefit from faster download speeds.

We hope this article answers most of your questions. If you have any questions on how this affects performance with Ricmotech simulators please contact us directly. Thank you.
Previous Post
Next Post